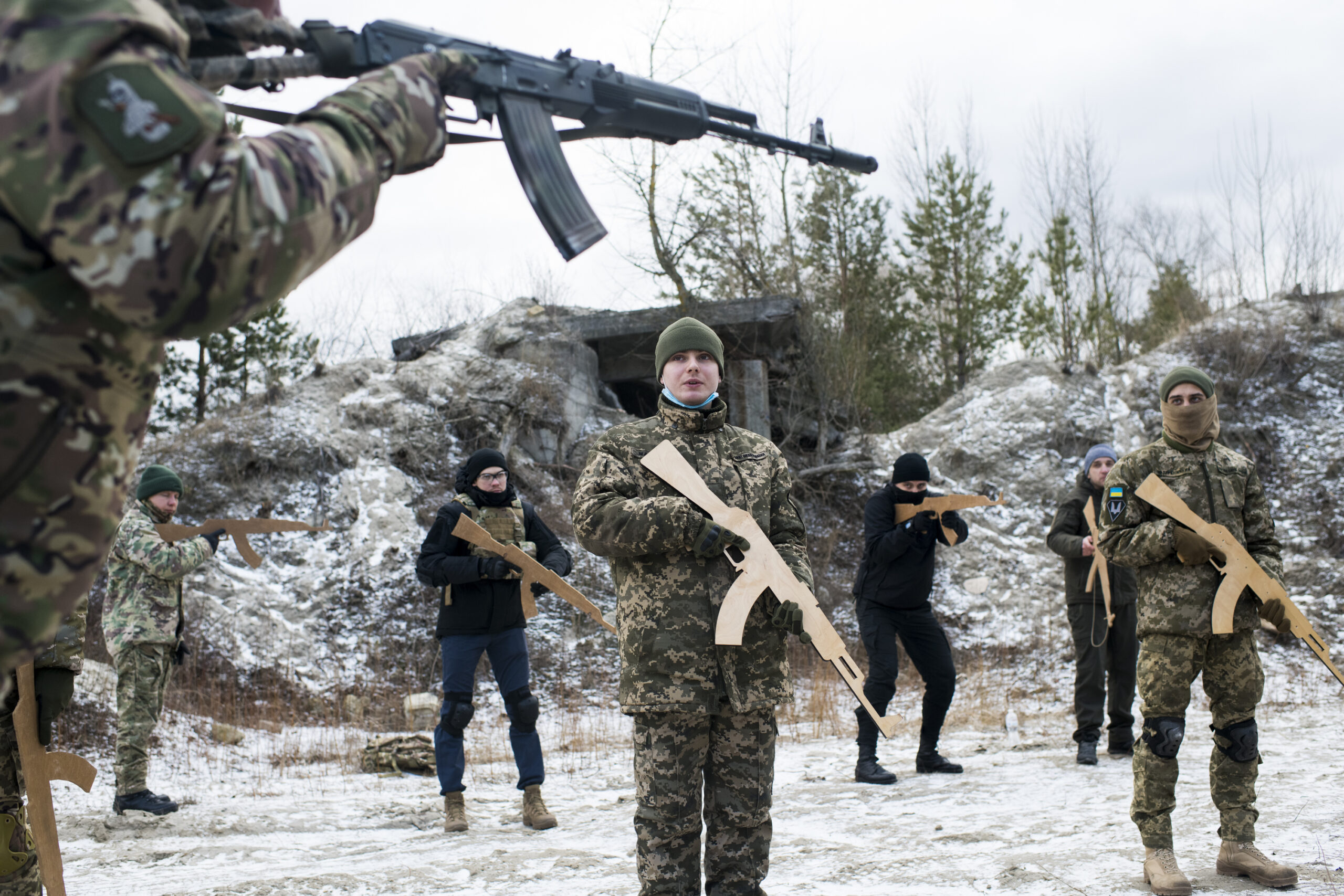 “I know for sure that I will not leave Ukraine [if Russia invades]. I will not live under occupation,” said a 51-year-old doctor, wife, mother of three, and gardener. “I would kill.”

KYIV. Falling snow clouded Marta Yuzkiv’s line of sight as she moved in formation with seven other fighters down a narrow road. Rifles at the ready and communicating with hand signals and whispers, they scanned their surroundings for the enemy stalking them in the nearby bushes.

Then, without warning, an ambush came from behind the pine trees. A Russian team of saboteurs gunned down four of Yuzkiv’s comrades. She dropped to the ground. But within seconds, she was shot and killed, too.

The fighters weren’t actually dead. The ambush was part of a series of war games held Saturday — on the grounds of an abandoned factory outside Kyiv — by veteran instructors overseeing a ragtag group of Ukrainian volunteers.

Russia is massing some 100,000 troops and military equipment around Ukraine, possibly mobilizing 75,000 reservists to join them, and threatening its neighbor with another large-scale attack unless the Kremlin’s demands for the US and NATO to abandon support for Kyiv are met. And fighters like Yuzkiv fear they could soon find themselves engaged in guerrilla warfare with highly trained soldiers under Moscow’s command.

“I know for sure that I will not leave Ukraine [if Russia invades]. I will not live under occupation. I will resist,” Yuzkiv, a 51-year-old doctor, wife, and mother of three who prefers gardening to unconventional warfare training, told BuzzFeed News. “I am a compassionate, empathetic person, but…” After taking a beat, she finished: “I would kill [to protect my country].”

The war games involving civilian volunteers demonstrate the lengths to which Ukrainians are prepared to go if President Vladimir Putin decides to attack. Such a move would be an attempt to alter the country’s increasing alliance with the West and could spark a land war of the likes not seen in Europe since 1945.

A poll done this month by the Kyiv International Institute of Sociology found that more than 50% of Ukrainians — some 20 million of them — are ready to resist in one way or another if Russia launches a new invasion, while more than 33%, or roughly 13 million people, would be willing to join in armed resistance.

Thousands — from Kharkiv in the east to Lviv in the west — in recent months have joined the forces, which are composed of about 80,000 volunteers in 25 separate brigades, or one for every region of Ukraine as well as the country’s capital city. They gather to train one day each weekend.

The fighters are civilians from all walks of Ukrainian society, including IT workers, bankers, doctors, taxi drivers, schoolteachers, shopkeepers, and more. They don hunting attire and mismatching uniforms from army surplus stores. Some of them wear sneakers better fit for the fashionable streets of downtown Kyiv than the battlefield. And not everyone has a working rifle. In fact, several wielded cardboard cutouts of Kalashnikovs at Saturday’s training.

Technically, the forces fall under the command of the Ukrainian military, essentially making them part of the country’s reserve army. But that doesn’t mean the military provides them garb and gear, although officials have suggested that defense force troops could eventually be given arms from the country’s stockpile. For now, they are forced to purchase everything on their own.

But what they lack in equipment, they make up for in determination.

Dmytro Ternovskiy, a 39-year-old physical therapist for the Kyiv Arsenal soccer club, is originally from eastern Donetsk but fled the Russia-controlled city for Kyiv in 2016. He told BuzzFeed News that he had seen firsthand how Russian warlords seized his city and brought death and despair to residents there. He joined the territorial defense force to help make sure the same doesn’t happen to Kyiv and because he was ashamed that he didn’t take up arms to fight off the Russians in 2014.

“It was very embarrassing that I was not with [Ukrainian fighters] then,” he said.

Ternovskiy is trying to make up for that mistake. He’s already spent nearly $4,000 USD on uniforms, a bulletproof vest, boots, an assault rifle, cartridges, ammunition, and shooting practice.

Vasyl Hryhoryuk, a 28-year-old entrepreneur, has him beat. He said he’s put more than $10,000 into his own fighting kit, which includes an AR-15 assault rifle and a Zbroyar Ukrainian-made sniper rifle. “If the dudes come from [Russia] and try to tell me how to live on my land, fuck them,” Hryhoryuk said with an air of bravado as he showed off his AR-15.

Hryhoryuk goes to a shooting range once a week and CrossFit and stretching courses twice a week. Every Saturday, he shows up at the abandoned factory grounds to train with his fellow defense force fighters in Kyiv.

Hryhoryuk has some past military training; he was conscripted into the Ukrainian army in 2011, at a time when it was “wildly underfunded.”

“Things are different now, These are professionals,” he said of Ukrainian soldiers. He hopes the defense forces will soon be as prepared and lethal.

The Biden administration, NATO officials, and the central government in Kyiv have all said they don’t know whether Putin has made a decision to invade Ukraine for a second time since 2014. But the increasingly ominous messaging from Moscow has them all on edge. Intelligence has suggested that an attack could come in late January or early February when tanks would be able to roll quickly over frozen ground.

In recent days, Russian officials have warned that Moscow will respond “militarily” if the US and NATO don’t back out of Eastern Europe and pull support for Ukraine — which officials in Washington and Brussels have said will not happen. On Tuesday, Putin clearly delivered that threat himself.

“If our Western colleagues continue the obviously aggressive stance, we will take appropriate retaliatory military-technical measures and react harshly to unfriendly steps,” he told Defense Ministry officials in Moscow. “Do they think we’re going to stand by and watch?”

President Joe Biden as well as the UK and other NATO countries have either said explicitly or implied that they would not deploy forces to Ukraine if Russia invaded. Instead, as a senior Biden administration official told reporters Friday, they are prepared to enact “economic and financial measures, and we are prepared to consider a number of things that we have not considered in the past, and the results will be very profound on the Russian Federation, but I’m not going to go into details.”

Ukraine’s foreign minister, Dmytro Kuleba, said he wishes the US would be more explicit in what it’s willing to do so Kyiv would be better positioned to defend itself if an invasion came to pass

“We know how to fight this war. Our soldiers have been fighting it for seven years,” Kuleba told BuzzFeed News in an interview last Tuesday. “But what our American and other partners can do is help Ukrainian soldiers fight this war. Which is strengthening our capabilities, supplying us with respective defensive weapons and military technologies now.”

Ukraine’s army was demoralized and in miserable shape after decades of neglect when Russia invaded here in 2014. The country of roughly 40 million people had only an estimated 6,000 battle-ready troops. Volunteer battalions backed by oligarchs and crowdfunded by civilians filled the void but couldn’t completely repel the more powerful Russia-backed separatist forces.

Today, Russia continues to occupy Crimea and control a swath of territory in Ukraine’s eastern Donetsk and Luhansk regions, which are combined about the size of New Jersey. Separating them from the rest of Ukraine is a 250-mile maze of trenches and bunkers from which the Ukrainian military and Russian-backed separatists wage a war of attrition that has killed more than 14,000 people since spring 2014.

After years of Western help, Ukraine’s army is now one of the largest in Europe, boasting 255,000 active-duty soldiers, 900,000 reservists, and some 90,000 paramilitary members. Washington has provided $2.5 billion in security assistance to Ukraine’s military over the past seven years, according to the White House. Among the types of assistance are Javelin anti-tank missiles, Humvees, communication systems, and counter-battery radars, as well as military training.

But Ukraine’s army is still not strong and experienced enough to defeat Russia if Putin unleashes the might of his military, which has over 1 million active-duty personnel and powerful ground, navy, and air forces, analysts say.

As part of its preparation efforts, Kyiv is testing air-raid sirens in the capital this week and reviving many of its nearly 5,000 bomb shelters, which include its central metro stations that were built on the orders of the Soviet leadership in the wake of World War II hundreds of feet underground. (The city also published a map showing the location of the shelters inside schools, spas, bars, residential buildings, and elsewhere.) The facilities could hold more than 2 million of the more than 4 million Kyiv-area residents for several days — but not long term.

Ukrainian news outlets have published stories about packing survival bags. The independent Hromadske news site painted a scenario for readers in which “the Ukrainian armed forces are resisting, but the Russians are using aircraft, rocket-propelled grenades and [other heavy weapons]. The front line is rapidly approaching your city… What to do in such circumstances?”

Stick tape to the window of your home to protect against flying shards of glass during artillery attacks, it said. And gather personal documents, cash, medications, as well as supplies, like bottled water, nonperishable food times, matches, batteries, flashlights, an ax, condoms, and more.

And then there are the Territorial Defense Forces, made up of motivated and patriotic Ukrainians like Yuzkiv, as well her husband and oldest son.

Training the fighters are some of Ukraine’s more experienced veterans. Among them is Serhiy Filippov, 60, who went by the call sign “Sedoy,” meaning “gray,” for the silvery locks that frame his grizzled face. He was a major in the Donbas Battalion, a volunteer fighting force that helped turn the Russian-backed separatist tide in 2014 and 2015.

“These guys are motivated. They come to learn and they are ready to be the first to die for this city,” Filippov said. But he wasn’t pleased with everything he saw.

Yuzkiv’s group, who took part in the ambush scenario, he said, responded poorly and slowly. He then explained a better way to deal with a surprise assault that he learned while fighting Russia-backed forces six years ago.

Filippov believes a new offensive from Russia is likely. “Putin gave his ultimatum [to the West] and it was rejected,” he said, adding that he doesn’t see the president as a man to retreat. “[Putin] must go further. It is very difficult to stop a car that’s moving.”

If the Kyiv Territorial Defense Force fighters are ready and willing to fight in a new war, they hope they won’t have to.

Oleh Steshin, 47, runs a small construction firm repairing the exterior of buildings and has expertise in ascending and descending large obstacles. He was born in Soviet Uzbekistan and has family spread around the former USSR, including in Russia.

Russia’s threats of invasion bring up a deeply personal fear. He worries that someday he could be looking through the scope of his rifle and see the face of his brother, who lives in Russia and could be among the soldiers sent to attack Ukraine.

“Can you imagine what that would be like?” he asked. “I try not to think about this. I really hope that he won’t be on the other end.”