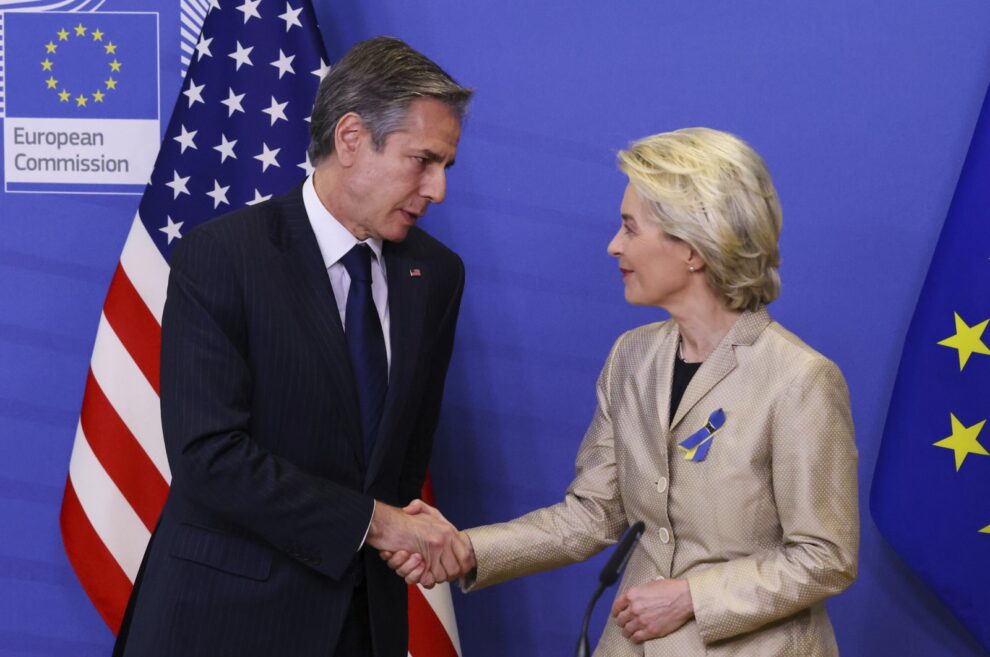 ith ties rooted in shared democratic values, common interests and history, the trans-Atlantic bond is a vital platform on which many other elements of our foreign policy are built. Europe has been and will continue to be our foundational partner in addressing the full range of global challenges,” is how the chapter on Europe in the “National Security Strategy (NSS) of the United States” released by the Biden administration starts.

The familiar sentences have been an integral part of successive American policy documents for the last seven decades. NATO represents the ultimate pinnacle of the relations between the U.S. and its European allies. In the new policy document released in mid-October, American policy-makers have very shrewdly woven a delicate amalgam of their commitment toward European security with their expectations from the Europeans in return. On the surface, there are very simple paragraphs but therein are embedded cryptic complications of the ostensibly very cordial and warm trans-Atlantic relations. Not surprisingly, the chapter on U.S.-Europe relations revolves around three key points: NATO, the ongoing war in Ukraine, and China. By using Ukraine as the key reference, the NSS has tried to build a case for the reinforcement of NATO politically, financially and militarily. While offering an unequivocal guarantee for the collective security of the continent, the NSS aggressively demands from its European allies shares of the financial and logistical cost related to the realignment of the alliance in the face of simmering threats from Russia and China.

To paraphrase the NSS, “We will count on our Allies to continue assuming greater responsibility by increasing their spending, capabilities and contributions. European defense investments, through or complementary to NATO, will be critical in ensuring our shared security at this time of intensifying competition.”

This is the pricking point where the gap is growing among trans-Atlantic partners. For quite some time, Washington has been forcefully persuading European capitals to increase their defense spending up to 2% of their respective gross domestic products (GDP). The gradual dwindling of the U.S. security footprint in Europe and subsequent erosion in European military capability since the 1990s after the demise of the Soviet Union has certainly created a security vacuum in Europe. NATO’s 2% metric is the key instrument that was introduced in 2006 when NATO defense ministers agreed to commit a minimum of 2% of their GDP to defense spending to continue to ensure the alliance’s military preparedness. Since then this – unbinding – guideline has been serving as an indicator of member states’ political will to contribute to NATO’s common defense efforts.

Up from three in 2014, only nine countries in 2022 have met this 2% defense spending commitment, while all major partners including Germany, France and Canada are still far from this target. Russia’s invasion of Ukraine has dramatically changed the whole security complexion of the European continent, inciting the U.S. to coerce its fellow members in the alliance to open up their purses to meet the evolving security challenges collectively. The NSS draft is laced with loud demands from the U.S. to NATO members to ramp up their defense spending and share the burden.

EU in a vicious circle

The Europeans, meanwhile, are trapped in a vicious circle: Yes, they understand the severity of the situation and want to aptly deal with the myriad threat in their neighborhood by increasing their defense expenditures, but they are being equally squeezed by the energy crisis that has put inordinate pressure on their already distressed economic institutions.

Two critical points have suddenly assumed unwarranted significance for NATO’s development as a viable security and political alliance in the backdrop of the Ukraine war. The immediate one is an implementation of the Readiness Action Plan (RAP) that embodies a comprehensive array of military undertakings designed to enhance the deterrent capacity-building of NATO’s military posture on its eastern border.

The second point is related to their old pledge to aim at increasing their spending up to 2% of their respective GDPs on defense within a decade. Since the demise of the Soviet Union, this is the first time that NATO has got a stimulus to revive and resurrect itself as a robust security structure. The American policy-makers are right in demanding their counterparts top up their contribution in the defense sector, but the reality is that prevailing economic insecurity is choking such ambitions of the Europeans. Germany is perhaps one of the prominent members of NATO that are taking the lead in unilaterally enhancing its defense expenditures in operational capabilities and defense production.

Germany has initiated a 100 billion euro ($107.2 billion) special fund for the enhancement of the Bundeswehr – the armed forces. The prima facie objective of this expense, after years of austerity, is to bolster the country’s military capabilities and enhance its operational preparedness – with the acquisition of F-35 fighter jets and CH-47 helicopters, the German drive for overhauling its defense has already kicked off. Similarly, two other neighbors of Germany, France and the United Kingdom have also amplified their defense research and developments (R&D) spending to the tune of 5.6 billion euros. There is definitely an urge among NATO members to increase their defense expenditure, but they are feeling the heat of shrinking economies and desisting from embarking upon this path at this time.

The second contentious point that surfaces on many pages of the NSS is the U.S. obsession with China as the main threat to global security and financial stability. There is a big disconnect between the U.S. and its European allies on this very point. The NSS singles out China as “the only competitor with both the intent to reshape the international order and, increasingly, the economic, diplomatic, military and technological power to advance that objective.”

Ironically, the need to cooperate with China on some mutual projects is fleetingly mentioned in the strategy document, depicting the one-sided approach in U.S. policy toward China. The Europeans, on the other hand, have partial synchronization with the U.S. on the question of outrightly declaring China as the “threat.”

The heavy trade dependence on China is perhaps the main fulcrum that is influencing the Europeans’ strategy toward Beijing. The Europeans’ economic entanglements are pushing them away from the hardline approach of the U.S., a fact that is being deliberately omitted by the American policy-makers while pressuring its European allies to side with them wholeheartedly in this China-U.S. competition. The Europeans are not ready to toe the American line blindly. Aligning its efforts with NATO colleagues is the key pillar of the U.S. strategy to encircle China through the “us or them” label, but it is treading this path without paying attention to their reservations. If the U.S. keeps forcing the European countries to pick a side, there is a huge risk of creating a wedge in NATO. Its transatlantic partners, while accepting the theoretical weightage of the China threat as a reality of the global power equation, are advocating for coordination and alignment with Beijing as well.

The U.S. and Europe cannot afford to have identical China policies. This is a very unrealistic demand by Washington. The Europeans are quite reluctant to listen to this diktat from the White House. Both Germany and France, the two biggest players on the European continent, are consistently showing their dislike for the U.S. policy on China through their engagement with Beijing.

German Chancellor Olaf Scholz, who paid a visit to Beijing two months back and facilitated a deal allowing Chinese shipping company COSCO to purchase a stake in the Hamburg Port, is quite pragmatic in his stance on China, “China remains an important business and trading partner for Germany and Europe – we don’t want to decouple from it.”

Similarly, French President Emmanuel Macron has been pleading for a halt in the China-U.S. confrontation and labeled it as “a big risk and a big challenge.”

Likewise, the European Union, in contrast to the U.S.’ three-pronged strategy of “invest, align and compete,” defines China both as a partner as well as an economic competitor, while maintaining its “Holy Trinity” approach to China. Indubitably, the U.S. and Europe, for their own selfish reasons, have divergent approaches vis-à-vis China and any attempt by Washington to dictate its policy will alienate its European partners.