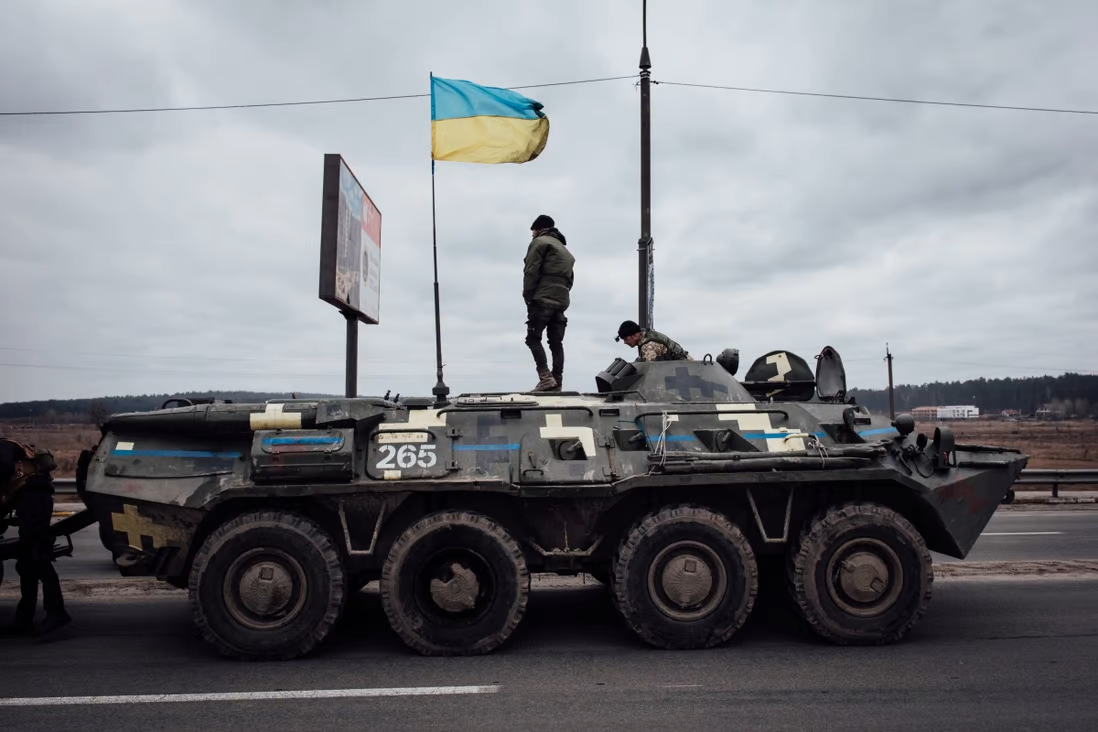 Russia’s long-feared invasion of Ukraine continues to rage six months on from Vladimir Putin’s announcement of his “special military operation” against the country in the early hours of 24 February, the Russian leader declaring, groundlessly, a need to “demilitarise and de-Nazify” the neighbouring state after eight years of fighting in the Donbas.

As Ukrainian president Volodymyr Zelensky leads by example from Kyiv, tirelessly rallying the international community for support, his people mount an impressive resistence, holding back Russia’s armed forces as best they can, most recently concentrating their efforts on reclaiming Crimea.

The aggressor meanwhile continues to employ brutal siege warfare tactics, surrounding the country’s cities and subjecting them to intense shelling campaigns, a strategy previously seen in Chechnya and Syria.

Ukrainian cities likes of Kharkiv and Mariupol have been battered by Russian missiles in pursuit of gradual territorial gains in the east and south of Ukraine while the targeting of residential buildings, hospitals and nurseries have led to outraged accusations of civilians being intentionally targeted and of war crimes being commited.

Mr Zelensky’s initial appeals for Nato to implement a no-fly zone remain unanswered as the West fears such an act would be interpreted as a provocation by Russia and draw the alliance into a much larger war over Eastern Europe.

However, US president Joe Biden, UK prime minister Boris Johnson, their European counterparts and UN secretary general Antonio Guterres have all condemned Moscow’s “unprovoked and unjustified” attack and promised to hold it “accountable”, with the West introducing several rounds of tough economic sanctions against Russian banks, businesses and oligarchs while supplying Ukraine with additional weapons, hardware and defence funding.

That said, the allies have also faced criticism for not doing enough to support the millions of refugees from the conflict, who have fled their homeland for neighbouring states like Poland, Hungary, Slovakia, Romania and Moldova.

Rumbling tensions in in the region, which began in December when Russian troops amassed at its border with Ukraine, really escalated in the final week of February when Mr Putin moved to officially recognise the pro-Russian breakaway regions of the Donetsk People’s Republic (DPR) and Luhansk People’s Republic (LPR) as independent states.

This enabled him to move military resources into those areas, in anticipation of the coming assault, under the guise of extending protection to allies.

That development meant months of frantic diplomatic negotiations pursued by the likes of US secretary of state Antony Blinken, French president Emmanuel Macron, German chancellor Olaf Scholz and UK foreign secretary Liz Truss in the hope of averting calamity had ultimately come to nothing.

But what are the key issues behind the conflict, where did it all begin and how might the crisis unfold?

How did the crisis start?

Going back to 2014 gives the current situation more context.

Weeks later, Russia threw its weight behind two separatist insurgency movements in Ukraine’s eastern industrial heartland, the Donbas, which eventually saw pro-Russian rebels in Donetsk and Luhansk declare the DPR and LPR independent states, although they went entirely unacknowledged by the international community.

More than 14,000 people have died in the fighting that has been ongoing throughout the intervening years, which has devastated the region.

Both Ukraine and the West have accused Russia of sending troops and weapons to back the rebels but Moscow has denied the allegations, stating that Russians who joined the separatists did so voluntarily.

A 2015 peace accord – the Minsk II agreement – was brokered by France and Germany to help end the large-scale battles. The 13-point agreement obliged Ukraine to offer autonomy to separatist regions and amnesty for the rebels while Ukraine would regain full control of its border with Russia in the rebel-held territories.

The agreement is highly complex, however, because Moscow continues to insist it has not been a party in the conflict and is therefore not bound by its terms.

In point 10 of the agreement, there is a call for the withdrawal of all foreign armed formations and military equipment from the disputed DPR and LPR. Ukraine says this refers to forces from Russia but Moscow has previously denied it has any of its own troops in those states.

Last year, a spike in ceasefire violations in the east and a Russian troop concentration near Ukraine fuelled fears that a new war was about to erupt but tensions abated when Moscow pulled back the bulk of its forces after manoeuvres in April.

How is the situation at present?

In early December 2021, US intelligence officials determined that Russia was planning to deploy as many as 175,000 troops near Ukraine’s border in preparation for a possible invasion that they believed could begin in early 2022.

Kyiv likewise complained that Moscow had placed over 90,000 troops near the two countries’ border, warning that “large scale escalation” was possible in January.

Additionally, the commander-in-chief of the Ukrainian armed forces said Russia has about 2,100 military personnel in Ukraine’s rebel-controlled east and that Russian officers hold all commanding positions within the separatist forces.

Moscow had earlier repeatedly denied the presence of its troops in eastern Ukraine, not providing any details about its military numbers and locations, saying that their deployment on its own territory should not concern anyone.

Meanwhile, Russia has accused Ukraine of breaching Minsk II and has criticised the West for failing to encourage Ukrainian compliance with its conditions.

Amid the acrimony, Mr Putin has rejected a four-way meeting with Ukraine, France and Germany, saying it is useless in light of Ukraine’s refusal to abide by the 2015 pact.

Moscow has also strongly criticised the US and its Nato allies for providing Ukraine with weapons and holding joint drills, saying that this encourages Ukrainian hawks to try to regain the rebel-held areas by force.

Mr Putin is known to deeply resent what he considers to be Nato’s gradual shift east since the collapse of the Soviet Union in 1989 and is determined to block Ukraine being granted access to its ranks.

With Mr Putin’s announcement of 24 February, the worst case scenario has now been realised.

The Kremlin had previously routinely denied that it had any plans to invade, claims that few believed – with good reason, as it turned out.

Even after the Russian president’s declaration of war, a Russian envoy to the UN denied that Moscow had any grievance with the Ukrainian people, whom he insisted would not be targeted, merely those in power.

That has proved to be entirely false.

Western leaders, united in condemnation, have rendered Russia a pariah state on the world stage, their sanctions promising to tank the Russian economy, which may ultimately place renewed pressure on Mr Putin at home, despite his best efforts to silence critical media and nascent protest movements.

Mr Biden has meanwhile moved to assure the international community that Russia will be held accountable for its actions.

“Russia alone is responsible for the death and destruction this attack will bring, and the United States and its allies and partners will respond in a united and decisive way,” he has said.