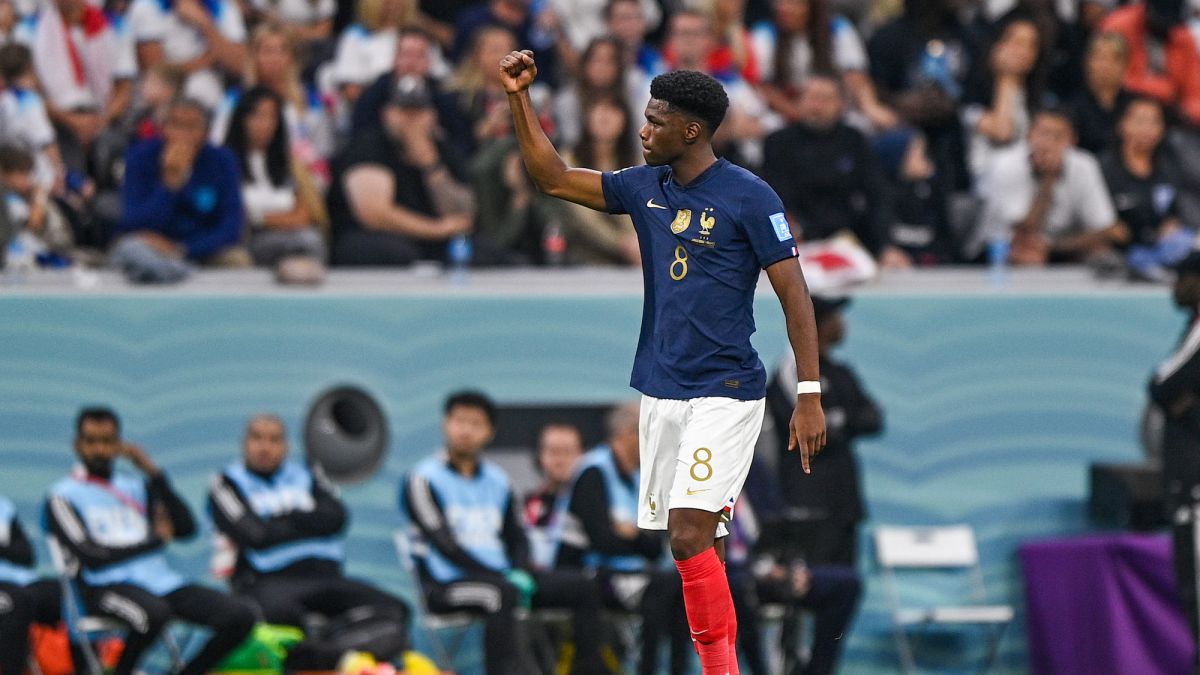 World Cup holder France remains on course in its title defense after beating England 2-1 to reach the semifinals at Qatar 2022.

England grew into the game and team captain Harry Kane emphatically converted from the penalty spot to draw the 2018 semifinalists level. The goal was his 53rd for his country, drawing him level with Wayne Rooney as England’s all-time top scorer.

With just over 10 minutes remaining, Olivier Giroud’s header gave the reigning champion the lead once again, with Kane skying a late penalty as France was able to hold onto victory.

France will face Morocco in the semifinals on Wednesday after it beat Portugal earlier in the day to become the first ever team from Africa to reach this stage of the World Cup.

The French victory ensured Didier Deschamps’ team is the first defending champion to have progressed past the quarterfinals this century.

“At the end of the game on our last chances, we knew how to be dangerous. I knew I was going to have another chance and Grizi gave me a great pass,” Giroud told the French Football Federation’s website, referring to Antoine Griezmann, who set up France’s winning goal with a superb cross.

“Tonight, it was a great match, we know the talent of this young English generation, we made a very solid match, we tried to be powerful in our counterattacks.”

A clash of titans

It was a match between two out of the final four teams at the 2018 World Cup, with both nations seen as heavyweight contenders to win the Qatar 2022 title.

And even in the early exchanges, the magnitude of the moment was evident, as the two teams tested each other out.

The first real chance of the game came just after the 10-minute mark, when Giroud directed a cross straight into the grateful arms of Jordan Pickford in England’s goal.

The breakthrough for the French wasn’t without controversy.

England winger Bukayo Saka was left on the floor after a tackle from France defender Dayot Upamecano, although Brazilian referee Wilton Sampaio turned away English protests claiming a foul.

And, after a swift counterattack involving Kylian Mbappé, England was punished as a bullet of a strike from Tchouaméni – his first World Cup goal – from outside the box nestled in the bottom corner to give France the lead.

Minutes later, England players were once again pleading with Sampaio for a decision in their favor after Upamecano and Kane tangled legs on the edge of the French penalty box.

After a brief deliberation with the video assistant referee (VAR), those pleas were dismissed and the game continued.

Chances were few and far between in the remainder of the first half, with Kane coming closest, his close-range shot saved by his Tottenham Hotspur teammate Hugo Lloris in the France goal.

Immediately after the second half, England came out firing, with Jude Bellingham’s powerful effort from the edge of the box tipped over by Lloris.

The pressure eventually told as Saka was fouled by Tchouaméni and the referee pointed to the penalty spot, giving England the perfect opportunity to draw level.

Almost immediately from the restart, France almost reclaimed the lead, but Adrien Rabiot’s first-time effort from the edge of the box was palmed away by Pickford.

England looked the most likely to score, with a header from Harry Maguire glancing off the post as Gareth Southgate’s side turned up the pressure.

Against the run of play, France retook the lead through its all-time top scorer, Giroud heading home his fourth goal of the tournament to give France the lead again with just over 10 minutes remaining.

England had a golden chance to draw level for a second time after Theo Hernández was adjudged to have fouled Mason Mount, Sampaio awarding a second penalty after reviewing the incident with the help of VAR.

This time, however, Kane blazed his effort over the bar.

Despite consistent pressure, England was unable to find a late equalizer, with Marcus Rashford’s freekick in the game’s final moments landing on the roof of the net.

And, as the referee’s final whistle went, the French players gathered in a celebratory huddle as Kane sank to his haunches in desperation.

“I said to the players I didn’t think they could given any more,” Southgate told ITV. “Fine margins have decided the game, the way we’ve progressed this tournament has been excellent.

“France know they’ve been in a hell of a game. We win together and lose together. We’ve let a couple of goals in and missed a couple of chances. We wouldn’t be here if it wasn’t for the goals (Kane) has scored for us.”

Asked after the final whistle if the defeat felt like England had a missed an opportunity to progress at Qatar 2022, England midfielder Jordan Henderson told ITV: “Probably yeah, because we felt really good, performances were really good.

“The focus and the hunger was good every single day, but unfortunately, it wasn’t our night. You gotta give credit to France, they’re a good team, but I still felt it was there for us to win tonight.”

Henderson added: “Straight after the game, it’s difficult to find the right words. I thought we gave everything in the game.

“You know, disappointed to go one – nil down, but I thought the character and the mentality to keep going in the second half and find the equalizer … We gave everything and unfortunately it wasn’t our night.”