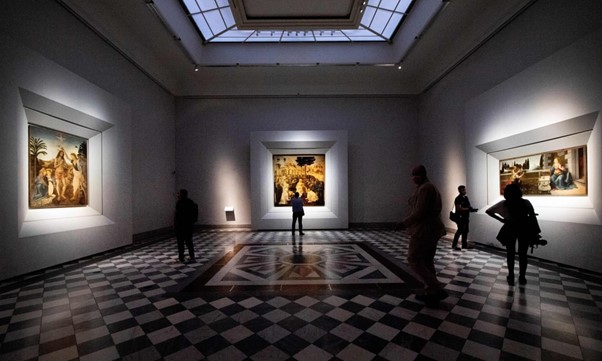 After seven years running Italy’s flagship museum the Uffizi, its director has clearly had enough of inappropriate punctuation.

Eike Schmidt has laid out his rules for email etiquette in a message to staff.

Bold characters are out, although underlining is still acceptable where suitable for words or salient phrases.

There was no reference to emojis but, judging from the tone of the circular, complete with its culture ministry heading, there would be little room for them either.

“It was the conversation of the day for many employees in the corridors, at the water cooler or in the café,” Uffizi Galleries spokesperson Tommaso Galligani told the BBC by email, with no hint of a character out of place.

As staff at the Uffizi in Florence turned their thoughts to Christmas, this was a reminder that they were representing a ministry of culture institution in the city of Dante, considered the father of the Italian language.

Mr Schmidt’s main bugbear is excessive punctuation, not unlike UK Thérèse Coffey who objected to the so-called “Oxford comma”.

His circular may have lacked Dante’s style but the sentiment was clear:

The entire staff of the Uffizi galleries is asked to abide scrupulously by these above-mentioned rules for best practice in writing
Eike Schmidt
Director, Uffizi galleries

Mr Galligani said that most staff loved the circular and many colleagues smiled, but he also believed there were some who did not have much to laugh about.

“The tendency to consider email exchanges as something totally informal, like a chat on WhatsApp, and as a direct outlet for emotions of all kind is now rampant, and I believe it was the director’s intention to contain this problematic trend.”

For Benjamin Weissman, lecturer in cognitive science at Rensselaer Polytechnic Institute in the US, Eike Schmidt’s recommendations are an attempt to resist a gradual integration of elements that have made text-based communication closer to the way people speak.

“It amounts to telling people they can only speak in monotone or with a neutral expression. In addition to any general issues of employers controlling the way employees communicate, this appears to restrict their expressive flexibility,” he told the BBC via email.