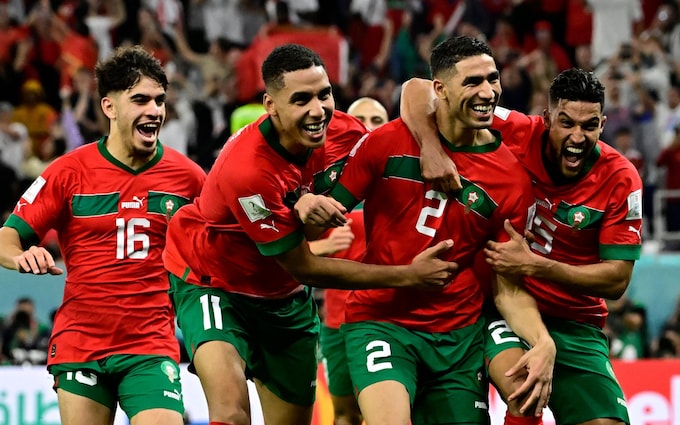 Moroccan fans exploded in joy on Saturday as their team became the first from any African country to reach a World Cup semi-final, filling the stadium with a deafening roar and unleashing cheering, crying, dancing and singing on the streets back home.

“They made us happy and proud and they proved that they can make it to the final. Why not? We are so proud of this team that is supported by Africa and Arabs” said Siham Motahir, a young woman in Rabat where cafes had filled with fans to watch the game.

The 1-0 win over Cristiano Ronaldo’s Portugal is Morocco’s third over a highly ranked European team in the tournament, a run that had brought delight across the country and widespread support across the African continent and Arab world.

African Union President Macky Sall wrote on Twitter, using capital letters to emphasise his excitement: “HISTORIC! AND FANTASTIC! THE ATLAS LIONS ARE QUALIFIED FOR THE SEMI-FINALS OF THE WORLD CUP! BRAVO MOROCCO.”

In an Abidjan cafe where people were watching the game and drinking beer to celebrate the win, customer Jules Goule said Ivorians were proud of Morocco’s win. “Through Morocco Africa has just shown that it can compete with other continents in football,” he said.

As the game wound on, Morocco fans screamed “Ole, ole, ole!” in unison, drowning out the handful of Portuguese fans and whistling whenever Portugal took possession of the ball.

Behind the two goals, banks of Moroccan supporters stood for the whole match with drummers and fan leaders coordinating the chants.

One man wearing the red and green of Morocco’s national flag and its football kit raised his hands in supplication as the final minutes ticked away, shouting “O God, o God.”

In the media box, a security guard, screaming with triumph, hugged a Moroccan journalist who was weeping with happiness.

As Moroccan player Jawad El Yamiq circled the pitch with a flag draped around his shoulders, one fan stood motionless, looking out over the pitch with his hands over his mouth as if unable to take in the scale of the win.

But in Rabat, joyful fans thronged the streets, people poured towards the downtown square where Morocco’s victories are celebrated.

“The last few minutes felt like hours,” said one fan, Samir Saqri, as he joined a crowd pouring out from the cafe where they had watched the game to head downtown.

“Morocco is showing that African teams can compete at a high level,” he added.