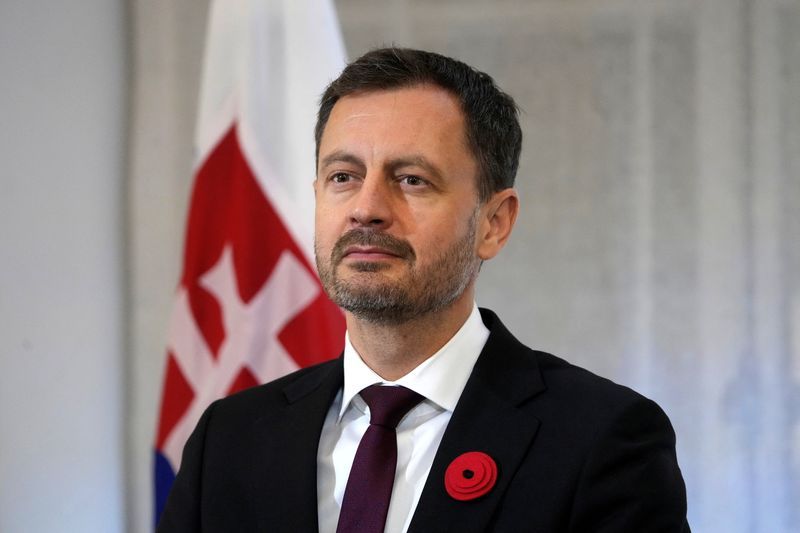 Slovakia’s government was toppled, deepening political chaos and raising the prospect of a snap election in a country where pro-Russian opposition leaders have bridled against support for Ukraine.

The no-confidence motion was initiated by a former coalition partner, Freedom and Solidarity, which quit Prime Minister Eduard Heger’s government in September. It follows months of infighting that has hampered legislation, including the approval of aid to households and businesses to help them pay for skyrocketing energy bills and double-digit inflation.

President Zuzana Caputova began negotiations with political leaders Thursday evening. She now has several options to end the political turmoil in the euro-area country of 5.4 million.

She may ask the current government or a caretaker cabinet to remain in place until elections that may take place as early as in spring. She may also select a new team to form a majority — a difficult prospect in a political sphere riven by disputes over everything from budget spending to sending weapons to neighboring Ukraine.

To trigger a snap election, lawmakers would have to first amend the constitution to shorten their term. That prospect raises the risk that another eastern European Union member may tilt away from the bloc’s liberal values as Brussels wrangles with nationalist governments in Poland and Hungary over the rule of law.

Freedom and Solidarity leader Richard Sulik, a libertarian whose party has been instrumental in toppling three cabinets since 2012, blamed Heger for being fiscally irresponsible and for chaotic decision-making.

He didn’t offer an alternative to the current administration, saying only “we are not a fan of early elections.” Sulik’s biggest coalition rival, Finance Minister Igor Matovic, accused him of playing the role of “useful idiot” to opposition parties that lead opinion polls and are pushing for early elections.

Triggering a snap ballot would require amending the constitution with support of 90 of parliament’s 150 members. There’s no clarity over whether the biggest parties in the government would support such a motion.

But parliament Speaker Boris Kollar said the assembly would vote on an amendment that would allow early elections next week, and said he would back it.

“We need to protect citizens now,” Kollar said. “The budget may not be approved, which would threaten promised energy subsidies and wage increases.”

Despite the current government’s efforts to lead Slovakia through the pandemic and support Ukraine, constant squabbling has eroded its popularity.

At the same time anti-western sentiment — accompanied by anti-vax and pro-Russian disinformation on social media — has undercut support for the EU and NATO. Every other citizen believes that Russia actually attacked Ukraine and more Slovaks trust Russians than Americans, according to a recent poll.

Fico, a three-time premier who was forced to step down in 2018 after the murder of a journalist investigating corruption, has rebounded from record low support last year and ranks second in surveys.

He has vowed to stop weapon deliveries to Ukraine and only provide humanitarian assistance if he returns to power. He and Pellegrini have initiated a referendum for January that may force the constitutional change and are eager to retake power, and the latter applauded the government’s ouster.

“It’s the nicest present under the Christmas tree for Slovaks,” Pellegrini wrote on Facebook after the vote.