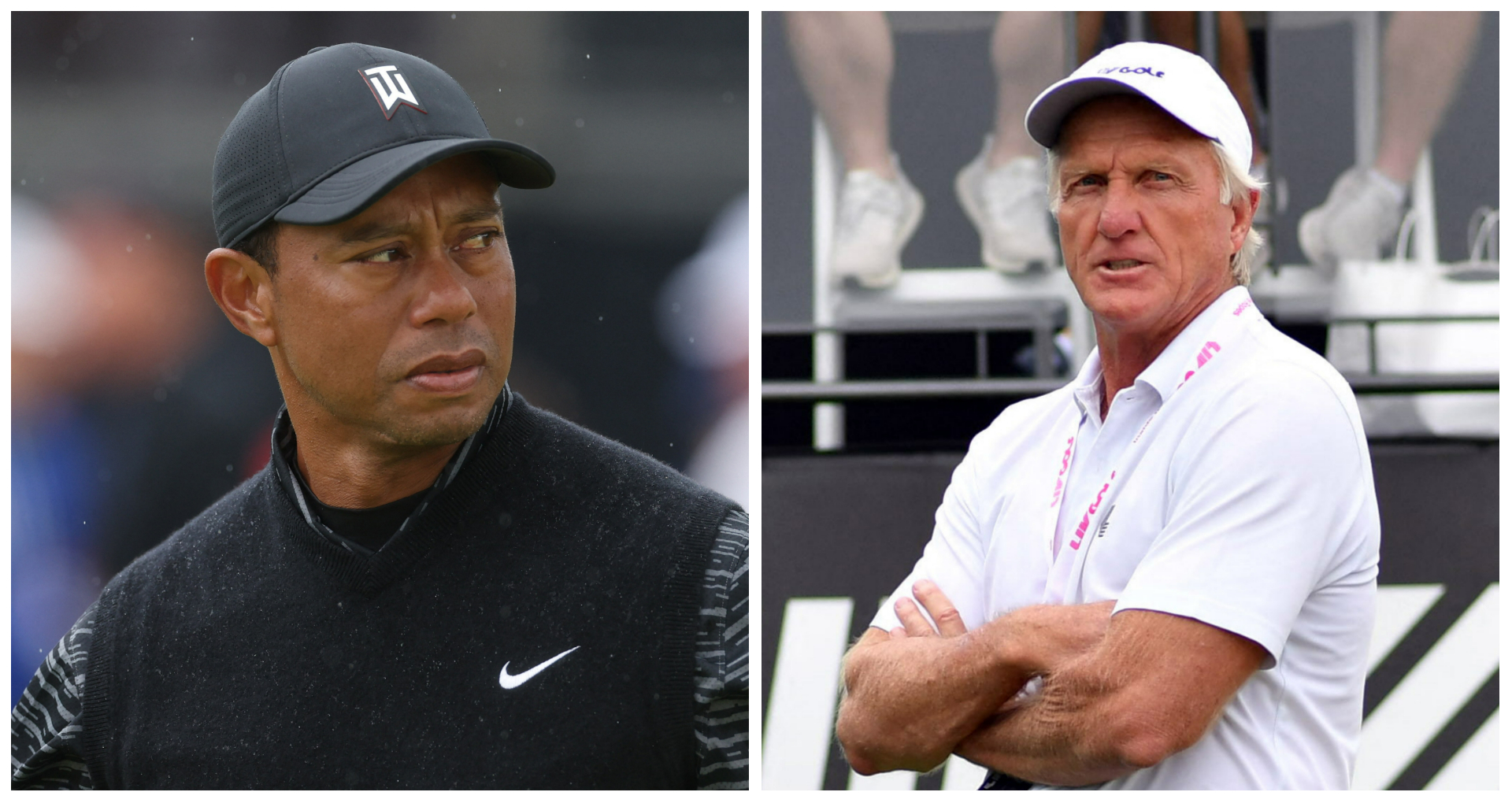 Tiger Woods has joined Rory McIlroy in calling for Greg Norman to quit as boss of the breakaway LIV Golf Tour.

Woods believes it is possible for the PGA Tour to negotiate a settlement with the Saudi Arabia-funded LIV Tour, but only if Norman steps aside.

Speaking before this week’s Hero World Challenge, Woods called on LIV to suspend their legal action against the PGA Tour.

“I think Greg has to go, first of all,” Woods, 46, said. “And then obviously litigation against us and then our countersuit against them, those would then have to be at a stay as well.

“So then we can talk, we can all talk freely.”

Woods accused the LIV Tour of stirring “animosity” after recruiting several big names – including Open champion Cameron Smith and other major winners such as Dustin Johnson and Brooks Koepka – with large signing-on fees.

“There’s a lot of animosity, especially from their leadership,” said Woods, who equalled Sam Snead’s record of 82 PGA Tour victories before injuries curtailed his playing career.

“And they want to be a validated tour with world ranking points and they’re buying up tours around the world and I don’t know what their end game is.

“It might be just being an official member of the golf ecosystem and being recognised with world ranking points. I think that’s what their intended goal is.

“You know, they’ve spent probably close to $2bn this year. Who’s to say they can’t spend $4bn or $5bn next year? We just don’t know. It’s an endless pit of money.

In Dubai two weeks ago, McIlroy said that Norman needed to leave his role as commissioner and chief executive if there was to be peace between the PGA Tour and LIV Golf. “No one’s going to talk unless there is an adult in the room,” said the current world number one.

It was reported that LIV were lining up Mark King, the former boss of golf manufacturer Taylormade, to replace Norman but this was strenuously denied.

LIV Golf managing director Majed Al-Sorour said in response to the Daily Telegraph’s report: “Greg Norman is our CEO and commissioner. Any suggestion that changes are being made to Greg’s title or role is patently false.”

Woods says it is impossible for both organisations to coexist under the current set-up. “Not with their leadership, not with Greg there and his animosity towards the tour itself,” he said.

“I don’t see that happening. As Rory said – and I said it as well – I think Greg’s got to leave and then we can eventually, hopefully, have a stay between the two lawsuits and figure something out.

“But why would you change anything if you’ve got a lawsuit against you? They sued us first.”

LIV launched their anti-trust lawsuit against the US-based circuit after players who joined the breakaway set-up were suspended indefinitely from the PGA Tour. A trial date has been set for January 2024.

A countersuit has been launched by the PGA Tour and there are separate legal proceedings between LIV and the European based DP World Tour, which will be heard in February next year.

“I think it has to start with leadership on their side,” Woods added. “Understanding that what is happening right now is not the best fit for the future for the whole game of golf.

“Now, what is the best way for our game to grow? It’s not this way. But granted, you need to have the two bodies come together. If one side has so much animosity, someone trying to destroy our tour, then how do you work with that?”

‘Charlie will hit all the shots’

Woods also revealed that he had two operations this year on the right leg that he badly injured in a car crash in February 2021.

Refusing to give details, he admitted that the damage he suffered contributed to the plantar fasciitis that forced him to pull out of this week’s tournament. He has not played since missing the cut in the Open at St Andrews last July.

Woods still plans to play with his son Charlie in the PNC Championship in Florida next month, when he can ride in a buggy, and at The Match on 10 December, when he will partner McIlroy against Jordan Spieth and Justin Thomas.

“The Father-Son will be a very easy week,” the former world number one said. “Charlie will just hit all the shots and I’ll just get the putts out of the hole, so pretty easy there.”

As for returning to competitive golf, Woods reiterated that he will play sparingly in future. “The goal is to play just the major championships and maybe one or two more, physically that’s all I can do,” he said.

“I don’t have much left in this leg, so gear up for the biggest ones and hopefully, you know, lightning catches in a bottle and I’m up there in contention with a chance to win and hopefully I remember how to do that.”

Seizing on EU tensions with US, Xi tells Europe to keep investing in China
Kazakhstan continues friendship with Russia